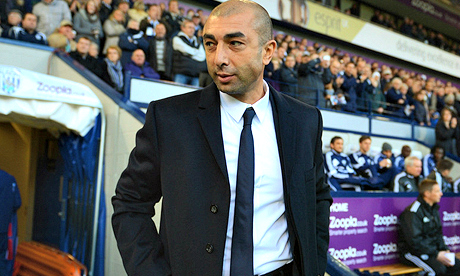 Chelsea have sensationally sacked manager Roberto Di Matteo following their 3-0 defeat to the Italian champions Juventus in the Champions League on Tuesday.

Less than seven months after guiding the Blues to FA Cup and Champions League glory, Di Matteo has been shown the door at Stamford Bridge for the club’s poor performances in this season’s Champions League. Chelsea are currently third in Group E behind leaders Shakhtar Donetsk and Juventus, and are on the verge of becoming the first defending champions to be eliminated in the group stages.

The team’s recent performances and results have not been good enough and the owner and the Board felt that a change was necessary now to keep the club moving in the right direction as we head into a vitally important part of the season.

The club faces a difficult task ahead in qualifying for the knockout stages of the UEFA Champions League as well as maintaining a strong challenge for the top of the Premier League while competing in three other cup competitions. Our aim is to remain as competitive as possible and challenge strongly on all fronts.

The owner and the Board would like to thank Roberto for all he has done for the club since taking over in March. Roberto helped guide us to an historic Champions League victory and a seventh FA Cup. We will never forget the huge contribution he has made to this club’s history and he will always be welcome at Stamford Bridge.

The club will be making an announcement shortly regarding a new first team manager.

The sacking of Roberto Di Matteo just six months after he won the FA Cup and Champions League is a bit unlucky, but to be honest not surprising at all!! It was always going happen, but it has happened quicker than anyone expected. The Italian was never Roman Abramovich’s man for the permanent job in the first place, but he won the Champions League last season (by accident maybe) and that probably forced the Russian billionaire to give him the job at the start of the season.

Actually, the dressing room with the likes of John Terry, Didier Drogba, Frank Lampard and Petr Cech won the trophy, not the manager. He has tried to change the style of football. A powerful team has been replaced by skillful young players and that has resulted in some eye-catching, mouth-watering sparkling football, but at the same time have also been overpowered by the likes of Atletico Madrid, Juventus, Shakhtar Donetsk and Manchester United.

The Blues started the season with the chance of winning seven trophies but are now on the freefall and that has made Abramovich furious. Although the owner was kind enough to overlook the Community Shield defeat to Manchester City, he was mad with the 4-1 defeat against Atletico Madrid in the UEFA Super Cup even after spending more than £80million on new players.

Chelsea need a miracle to make it through Group E of the Champions League and in danger of becoming the first holders in the history of the competition to be eliminated in the group phase. The  failure to get out of the group stages of Europe’s most prestigious club competition is a pretty poor return for a club with a huge wage bill and a big transfer kitty and Di Matteo even admitted himself that ‘if you fail at Chelsea, you lose your job’. He has paid the price for it.

Wow, Chelsea have sacked their manager!! I'm a bit late I know but its a madness.

Can't believe Roberto di Matteo has been sack after such a good record.Especially when I think he had 2cope with Terry scandals. #harsh

OMG just found out that #robbiedimatteo has been sacked. That hurts me.

Take over in Spring, win FA Cup, win Champions League, lie 3rd and very much in contention in PL after finishing 6th last season. Next??

Chelsea sack Di Matteo, bit harsh no???? Interesting to see who gets that job.

According to various reports across the UK, former Barcelona manager Pep Guardiola and former Liverpool boss Rafa Benitez are being linked with the new managerial vacancy at Stamford Bridge, with the latter believed to be the front runner for the job.

Roman Abramovich is obssessed with bringing Pep Guardiola and his style of football to Chelsea, but the former Barcelona midfielder is currently on a year’s sabbatical in New York and would need a ‘phenomenal’ offer cut that short. On the other hand, Benitez, who was in Abu Dhabi this morning, is expected to be flying into England on Thursday and could be given the job until the end of the season.

Chelsea are expected to make the appointment of the new manager before Friday, ahead of the club’s key fixture against the reigning Premier League champions and current league leaders Manchester City at Stamford Bridge on Sunday.

One thought on “Robeto Di Matteo Sacked As Chelsea Boss – Not Surprising At All!!”