Spain created history on Sunday night in Kiev by winning their third successive major tournament, with a dominating 4-0 win over Italy in the UEFA EURO 2012 final at the Olympic Stadium in Ukraine.

UEFA EURO 2012 has been an exciting and very competitive tournament with some tight, action-packed and mouth-watering matches.  Looking back to last 23 days’ of action, IntoTheTopCorner brings you it’s own UEFA EURO 2012 awards.

Many have criticised La Roja for being boring at times during the tournament, but when it mattered the most they turned on the style and silenced all the critics with emphatic 4-0 win in the final over Italy. Although Vicente Del Bosque’s men have not been at their best throughout the competition, they have done what is needed to win the trophy and ended the campaign with an outstanding performance in the final.

Some fans expected Ireland to cause some upsets or shocks in Group C, but it never happened. The team had a good blend of players but completely failed to perform when needed. They were completely out of depth and ideas. Giovanni Trapattoni’s men lost all of their three group games, conceding nine goals and scoring just one.

Most didn’t expect Greece to make it through to knockout stages from Group A, but in the end they were eliminated from the competition along with the likes of England and France. Coming into the tournament as huge outsiders to make it to the last eight, the 2004 winners stunned Russia in the last group game and then scored twice – without their inspiration skipper – against Germany in the quarter-finals.

Group B or the “Group of Death’ was always going to be tough but everyone expected Netherlands to reach atleast the last four if not the finals. The 2010 World Cup finalists came into the Championships with virtually the same squad that was present in South Africa but yet they failed to deliver. The team showed no unity at all with every player playing for himself rather than the team. In the end, the Dutch ended at the bottom of the group with no points on the board. 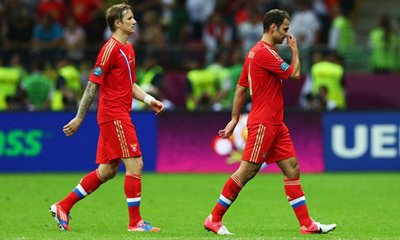 Russia came into the tournament as the favourites in Group A, and they made the best possible start with a win (4-1) and a draw (1-1) in their first two matches. With a point needed from their final group game against Greece, they were surely going through to the last eight. But they choked badly and lost 1-0 to the 2004 champions, which saw them drop down to third – from the top spot – in the group table and that meant they were going back home. 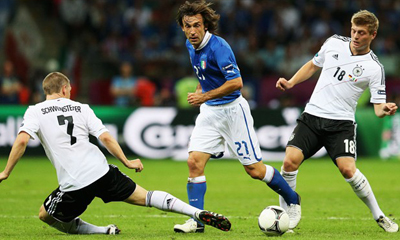 Although this tournament has thrown up many great games to watch, the semi-final clash between Germany and Italy was a great game for the neutrals. Germany were the favourites to defeat Italy and progress to the finals, Mario Balotelli struck twice to give Italy a shock two goal lead in the first half. The second half had more end-to-end action and the game could have gone either way but Cesare Prandelli’s men held on to a 2-1 victory and made the final. 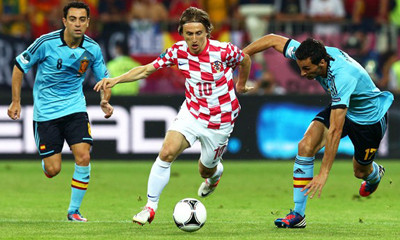 UEFA EURO 2012 has had very few matches which were boring or not entertaining, and the Croatia-Spain game was one of them. The final Group C game had a place in the quarter-finals up for grabs but Spain -who started the game without a striker – made it an one side affair by keeping possession with no real threat or penetration. Croatia had a couple of chances in the second half but Spain tired their opponents by keeping the ball and went on to score a late winner.

SHOCK OF THE TOURNAMENT – NETHERLANDS 0-1 DENMARK

There have been quite a few upsets throughout the tournament but this one was perhaps the biggest of them all. Everyone expected the Dutch to perform well in Poland/Ukraine but they were shocked in the first game itself. Netherlands completely dominated the possession and create a lot of chances but just failed to convert one of those chances. While on the other hand, the Danes had a very few chances but were very clinical and scored the only goal of the game in first half, which was enough in the end. 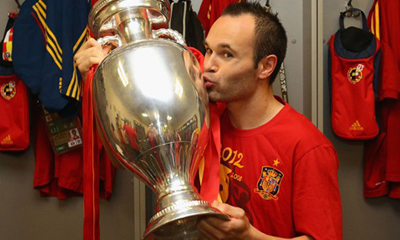 In the team loaded full of superstars, Andres Iniesta is one of the most underrated player. His control of the ball, accurate passing and deft touches lifts him way ahead of his teammates.   The Barcelona midfielder was the spark that carried his team forward. He was a constant attacking threat for the opposition and with Spain playing without a true centre-forward his penetration and positioning in the last third was very important. Completely deserves the Golden Ball award. 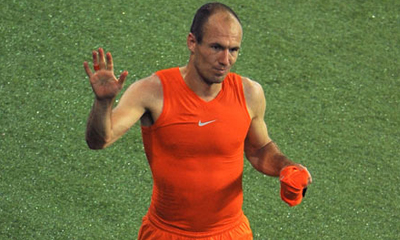 After coming from a poor season with Bayern Munich, everyone expected Arjen Robben to show his true colors for his country in Poland/Ukraine but it didn’t happen so. The former Real Madrid and Chelsea winger was a complete failure and at times was very selfish. His behavior was no good and his worst moment came when he was substituted off against Germany. Rather than cross the pitch and complete the substitution normally, he merely stepped over the nearest touchline, ripped his shirt off and walked angrily around the side of the pitch.

This one was a tough choice but the former Fiorentina boss deserves credit for his work with Italy. He dragged a team made up of players past-their-peaks and misfits all the way to the final. He did this with a combination of tactical innovation and expert man-management. Reinvented Italy as an attractive, attacking team, and showed himself to be a thorougly decent man on and off the field.

Mario Balotelli was already hyped for his on-and-off field antics prior to the tournament, but he showed his real talent and class on the field with his performances in Poland/Ukraine. The Manchester City man was not so impressive in the first two games but scored a classic volley against Ireland in the last group game and then put in a solid performance against England in the quarter-finals. His real moment came against Germany in the semi-finals, when he displayed his true talent, potential and class and also scored both the goals that helped his side reach the final.

After being heavily criticsed for his below-par performances in the first two games of the tournament against Germany and Denmark, the Real Madrid man came to life when it mattered the most. In the final group game against the Netherlands, Portugal needed a win to make it through and the former Manchester United star put in a man-of-the-match performance and scored twice which ensured his side won 2-1 after the Dutch had taken an early lead.

With Sweden already out of the tournament with defeats to Ukraine and England in their first two games, the Scandinavians were playing for pride in their final Group D game against France. The AC Milan forward Zlatan Ibrahimovic was one of the stars of the tournament and he ended his tournament in style with an acrobatic volley past keeper Hugo Lloris from the edge of the area, which helped his side to a shocking 2-0 win.

With Ricardo Montolivo already having missed one of Italy’s penalty during the quarter-final penalty shoot-out against England, the Juventus playmaker Andrea Prilo stepped up to the mark. With Joe Hart jumping around and making faces to put his opponent off, the former AC Milan midfielder causally chipped his spot-kick down the middle and completely fooled the Manchester City keeper who dived to his right.

May not be the best save of the tournament, but surely was the most important one. Just after the interval, Luka Modric put in a cross from the outside of his right foot, which was perfectly met by the head of Ivan Rakitic from 6 yards, but the Real Madrid and Spain skipper produced a great reflex save to deny the Sevilla man from scoring the goal which could have knocked out the defending champions in the group stages itself.

Having already scored the opener against Germany in the semi-finals, Mario Balotelli rifled the second past Manuel Neuer – which turned out to be the winner in the end – before running away towards the edge of the area, taking his jersey off and showing his upper body in Hulk style.

With the Denmark-Portugal game finely balanced, the Portuguese skipper Cristiano Ronaldo had a glorious chance to gives his side 3-1 lead when he was one-on-one with the Danish goalkeeper Stephen Andersen.However, very unlike Cristiano Ronaldo, he placed his effort well wide of the right-hand post.

HIGHLIGHT OF THE TOURNAMENT – ENTERTAINING FINAL 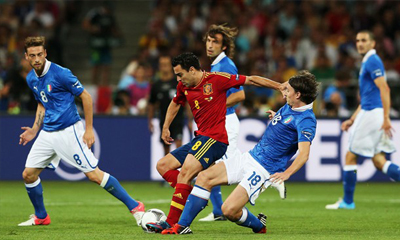 Everyone expected the Spain-Italy final to be a cagey affair with both teams trying to keep the possession a lot and defend, but the it was anything but that. The game was an open, end-to-end affair with Spain – as expected – dominating the game with a lot of possession, but at the same time playing some attacking football and creating a lot of goal scoring chances. Italy, on the other hand, also had chances to score but they failed to do so. In the end, as the scoreline shows the final was an entertaining affair and the defending champions completely outclassed their opponents.

LOWLIGHT OF THE TOURNAMENT – RACISM AND UEFA FINES 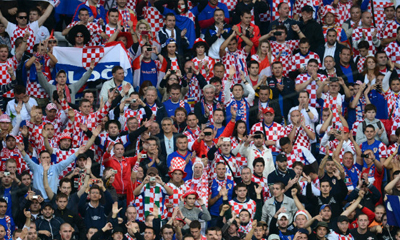 Despite it being a good tournament played in the right manner generally, ugly incidents of racism reared their ugly heads at times. No place for this in society or the beautiful game. Another low point of the tournament was the ridiculous fines by UEFA. Most of the racist fans of various countries were fined way less than Nicklas Bendtner for showing the sponsors on his underpants.

Republic of Ireland didn’t give their fans much to cheer about in terms of performance or goals, but the travelling Irish fans created quite the noise at their side’s Group C games and at the same time were not involved in any trouble in and out of the stadium.

While most of the footballers opt to ink their wives’ or children’s names, tribal symbols or pair of angel wings on their skins, Daniele de Rossi’s road-sign design tattoo to leave his opponents in no doubt as to what is in store was by far the best tattoo and a true innovation up to which the rest of the football world show now be aiming to live.

The Portugal and Chelsea midfielder’s pathetically scruffy skull-fuzz, stuck halfway between a total shave and a Mohican with the style points of neither, combine with his off-putting wall of tattoos on his whole body put him only one step away from the ‘Derelicte’ range of homeless fashion as invented by Will Ferrell’s Mugatu in ‘Zoolander’.

Biggest blunded was by the person who allowed 20,000 Russia fans to march through Warsaw to celebrate ‘Russia Day’. That’s 20,000 Russians marching through the Polish capital. What could possibly go wrong? It resulted in 183 arrests in the biggest incidence of hooliganism for decades.